Chesterfield Theatres has announced a star cast for their production of Beauty and the Beast as pantomime returns to the Pomegranate Theatre for Christmas 2021.

Suzanne Shaw shot to fame in 2001 when she auditioned for ITV’s reality talent show Popstars as they searched for the UK’s next big pop group.. Hear’Say. The band enjoyed great success with 2 albums, 4 top ten hits, a sell-out UK arena tour and their own prime-time Saturday night TV show, hearsay, It’s Saturday. Their first single, ‘Pure and Simple' was the fastest-selling non-charitable record in UK chart history, selling 1.3 million copies and going straight to No. 1.

After the break-up of the band in 2002, Suzanne returned to her acting routes. Her numerous theatre credits include Roxie Hart in the West End production of Chicago (for which she was nominated for Best Takeover in a Role in the What’s on Stage Theatregoer’s Choice Awards), Bobby in the remake of Summer Holiday, Narrator in Joseph and the Amazing Technicolor Dreamcoat, Janet in The Rocky Horror Show, Judy in White Christmas and The Vagina Monologues.

On TV, Suzanne has been a panellist on Loose Women, presented Bingo Lotto alongside Joe Pasquale, guest-starred in The Bill and played series regular Eve Jenson in ITV’s Emmerdale from 2009-2011. In 2008 Suzanne won the third series of ITV’s Dancing on Ice with her skating partner Matt Evers, subsequently performing on three national arena tours of the show and returning to compete in All-Stars: Dancing on Ice in 2014.

A seasoned pantomime performer, Suzanne has played the title roles in Snow White and Cinderella, Genie in Aladdin, Fairy Godmother in Cinderella and Alice in Dick Whittington but this year’s production of Beauty and the Beast marks her debut in the central role of Belle.

Suzanne is joined by Thomas Redgrave from Britain’s Got Talent Winners Collabro in the role of Gaston. The world’s most successful Musical Theatre group, the Collabro boys met for their first rehearsal only one month before going on to wow The Britain’s Got Talent judges, Simon Cowell, Amanda Holden, Alesha Dixon and David Walliams, at their first round audition at London’s Hammersmith Apollo.

Their rousing rendition of Stars; their first public performance as a group; brought both the audience and all four judges to their feet and their overwhelming popularity secured them a coveted spot in the live finals. Collabro went on to win the Eighth series of Britain’s Got Talent with one of the highest majorities in the show’s history. Millions of captivated viewers watched as Collabro claimed their prize, performing in front of the Duke and Duchess of Cambridge at the 2014 Royal Variety Performance at the London Palladium.

Seven years on, and with a legion of loyal fans; known fondly as the Collaborators; Collabro have gone on to enjoy phenomenal success with six studio albums under their belt and a string of worldwide sell-out tours across the UK, America and Asia as well as supporting both Sir Cliff Richard and Barry Manilow on their recent arena tours.

Also joining the line-up is vocal impressionist Andrew Fleming. A gifted comedian, mimic and vocalist with a warm stage presence and rapier-sharp wit, Andrew reached the season 9 semi-finals of Britain’s Got Talent impressing all four judges with what David Walliams called “a real signature act”. An experienced pantomime comic, Andrew’s dynamic and high energy physical performances have made him a memorable favourite with audiences all over the UK.

Chesterfield Theatres will be joining forces once again with award-winning pantomime producers Paul Holman Associates to present this year’s much-anticipated production. Pantomime Producer Paul Holman said, “After a very challenging time, I think we’re all ready for some good old-fashioned fun, laughter and panto magic. We’re pulling out all the stops to make this Chesterfield’s most spectacular pantomime yet. As well as a fantastically talented cast, there will be breathtaking special effects, glittering scenery and costumes and plenty of traditional audience participation to keep the whole family entertained .”

Beauty and the Beast runs at the Pomegranate Theatre from Friday 3rd December 2021 to Sunday 2nd January 2022. 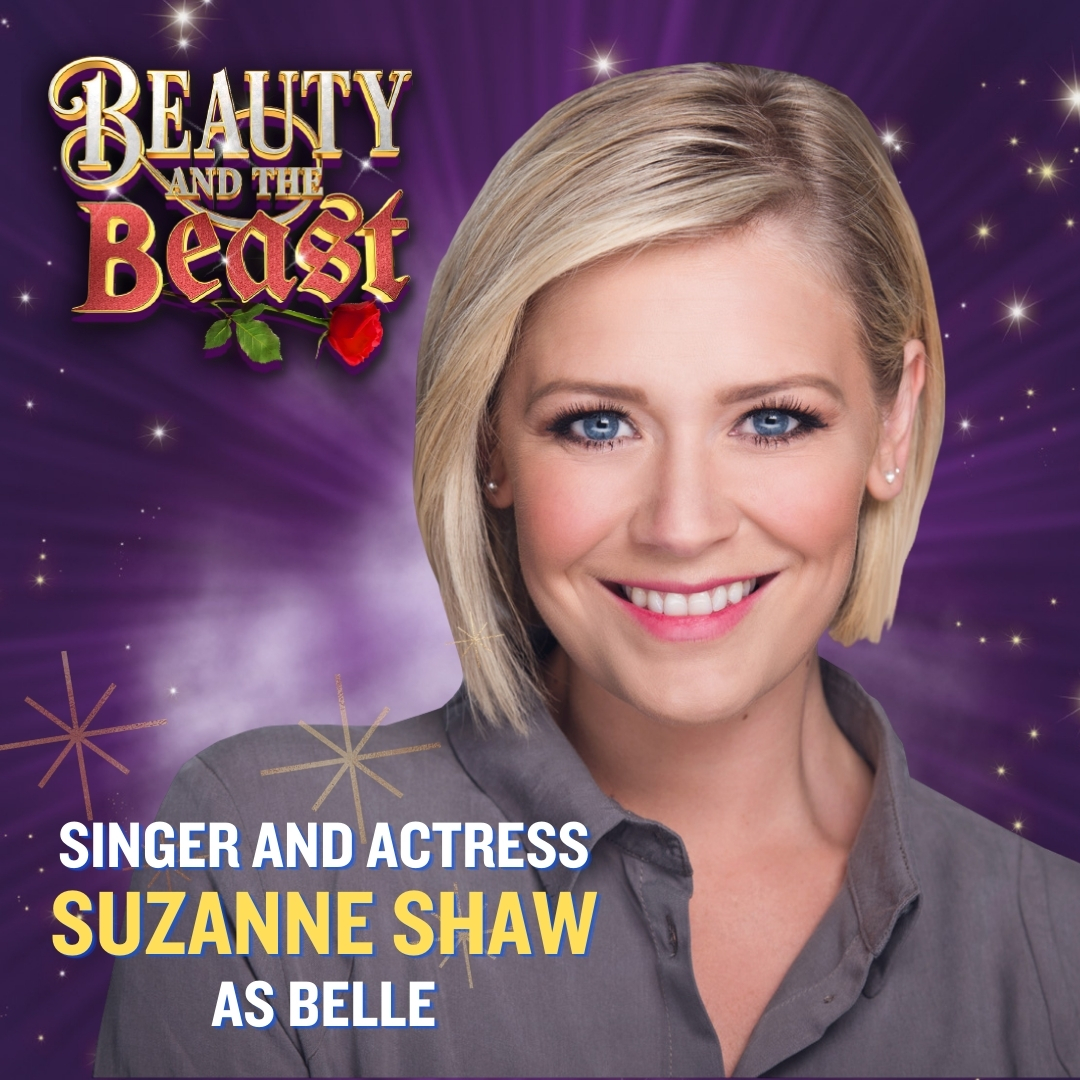 Suzanne made her professional TV debut at the age of 12 in the BBC children’s drama Elidor and later appeared in several television series, including City Central, The Courtroom and Holby City.

Her big break came in 2001 when she auditioned for the ITV show Popstars and subsequently won a place in the newly-formed pop band, Hear’say. The group’s debut single was the fastest selling non-charitable record in UK chart history, selling over 1.3 million copies. They went on to have two number one records and four top 10 hits. They also had their own Saturday night TV show (Hearsay It’s Saturday), performed at the Royal Variety Show with Elton John, and headlined their own hit UK tour. 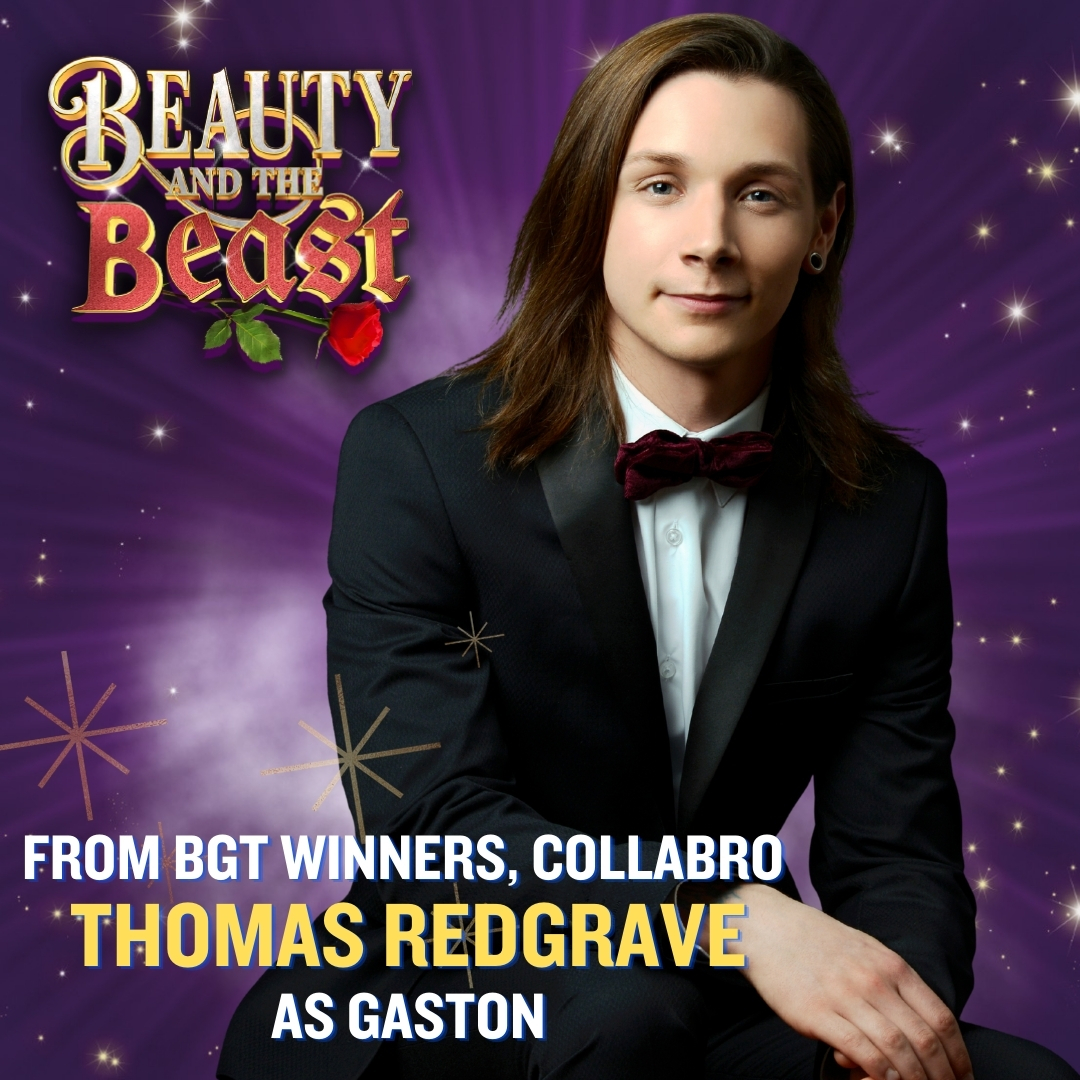 Thomas is best known as a member of the band Collabro, who won Britain’s Got Talent in 2014.

Since winning, the band have recorded six studio albums, with their debut album Stars reaching number 1 in the UK album charts. They have also travelled the length and breadth of the country with five sell-out tours, in addition to touring internationally in America, Canada and Japan. Their most recent album, Christmas Is Here, is a mix of the boy's favourites festive songs.

Multi-talented Andrew has been described as a “singing Peter Sellers”... comedian, mimic and a strong vocalist with a warm stage presence and rapier-like wit. In his shows he inhabits the personas of countless celebrities from Keith Lemon to Kenneth Williams, Tom Jones to Amy ‘Housewine‘, complete with costumes and parody songs. His Sinatra concerts have been lauded as amongst the most authentic yet heard. 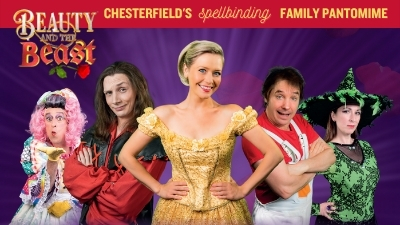